Recuperating the Legacy of 1973: Thinking through Urban Acrobatics 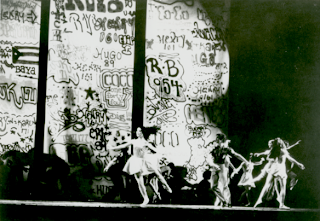 In 1973 Twyla Tharp choreographed Deuce Coup, a collaborative piece between the Joffrey Ballet and several talented young writers who were part of the heyday of the New York City subway graffiti movement.

As the dancers pirouetted, grand-jetéed, and leapt across the stage writers crouched in the background writing their names on monumental panels that loomed behind the dancers bringing what then was commonly framed as the "urban jungle" aesthetic of 1970s New York into the pristine dance world.

The late 1970s and early 1980s offered scenes for tentative experimentation with graffiti in the gallery world, with Basquiat and Keith Haring becoming the (not entirely representative) poster children for a hybridized street-gallery art.

What would have happened if Deuce Coup became a more elongated conversation? Can we see its traces in body painting? Or perhaps, the whole arm movements and diagonal knee to nose strokes of the writer during a live paint jam? Graffiti is an art that has a history of movement, in terms of post WWI freight train monikers,the train-and-freight canvases that offer the most iconic images of 1970s New York,  traces of diasporic migrations in placas and cholo inspired writing in Los Angeles but also the practice of writing itself: feats of daring to reach overpasses, billboards, subway tunnel throwups, rapid alleyway tags, and multi-story productions.

Such daring movements point to another genre of movement that has migratory histories and a dynamic aesthetic: the circus. Aerial acrobats climb hundreds of feet in the air to create astounding shapes by contorting their bodies and playing with gravity. Even more so than graffiti, such art leaves no trace. The train figures in circus history as a mechanism of travel, but also a space for living.

Notably, practitioners of both art forms have historically figured as social outsiders, and yet, participate in forms of expression that are spectacularly public, offering fascinating oscillating scenes of secrecy and publicity.

Circus and graffiti art offer each other productive sites for conversation around movement, publicity, and spectacle. We can see hints of a desire to cultivate such conversations in pieces like 7Doigts Traces performance, which combines acrobatics, drawing, and an urban atmosphere.

This project, to take place initially in New York City in early September 2013, and Chicago in early April 2014 will begin such an undertaking.
Posted by Unknown at 10:26 AM No comments: